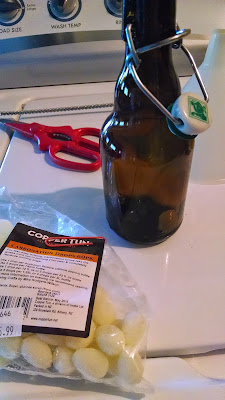 I've mentioned before that I've had trouble getting standard levels of carbonation in my bottles since moving to Hawaii. Some bottles come out flat, and others are so over-carbonated that the whole beer foams out of the bottle when you pry off the crown. One theory I've developed, as a possible reason for this irregular carbonation, is that the bottles end up with varying levels of priming sugars. Typically, I'll melt some priming sugar in with a cup or two of water, and add that to the carboy immediately before bottling. I'm wondering if the that sugar doesn't mix in evenly with the unbottled beer. Perhaps it sinks to the bottom of the carboy and then gets sucked out by the syphon, so that the first several bottles get more of the sugar than the last few bottles.

In order to test this theory, I've bottle my last two batches using carbonation drops for the priming. The way they work is you add one drop per 12 oz bottle, or two drops for a bottle 22 oz or bigger. The amount of sugar per bottle should be pretty even, using this system. And so far it seems to be playing out. I've been drinking bottles from the first batch, and so far they've all been perfectly carbonated.

The downside is that the carbonation drops end up costing around 10X more than just buying sugar and mixing it in with the whole batch. But in the end that's still just an extra 10 cents a bottle. If I can do away with one more brewing difficulty, 10 cents a bottle is worth it to me. 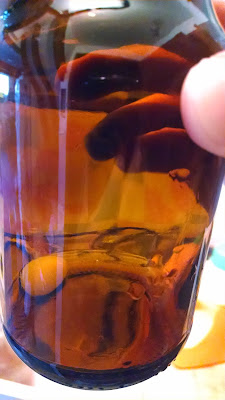 Back in April I posted about making mead for marriage gifts. The batch that inspired that post is in bottles now, and we've already given the first bottle away. I figured I'd do a quick followup to mention a final step I took before considering this project complete. 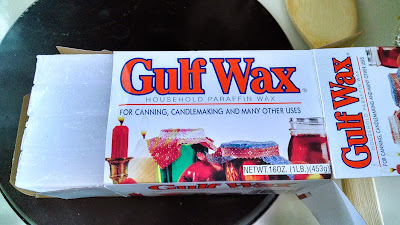 Mead is a drink that does best if aged for long periods. The last batch I brewed didn't really start to seem "right" until about two years after adding the yeast to the must. But the typical crowns we cap bottles with aren't really meant to sit for very long. The rubber on the inside starts to degrade, and the crown loses its ability to maintain an airtight seal. 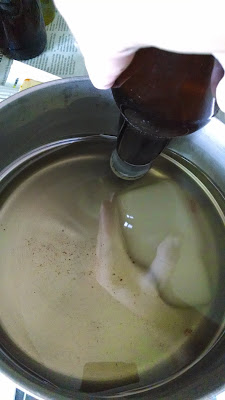 So, for this most recent batch of mead, I capped each bottle with a layer of wax. The was isn't subject to the same degradation that can affect the rubber in the crowns, so it should create a more durable, longer-lasting seal. It wasn't hard to do: just buy some wax and melt it in an old pot, then dip the top of each bottle in the melted mixture. Make sure the pot you use is one you don't plan on using for anything but melting wax in the future, because it's a pain in the butt to try to clean out the pot afterward. 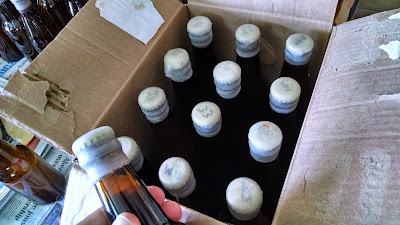 Email ThisBlogThis!Share to TwitterShare to FacebookShare to Pinterest
Labels: besides beer

A book to drink beer to 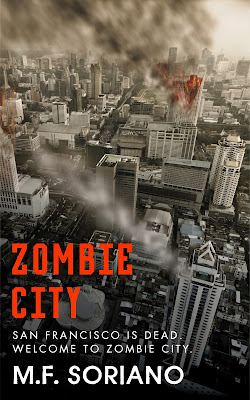 Just a quick post to help spread the word about my new fiction offering. I've been working on a zombie apocalypse story, releasing it in segments as I went along, for about a year. I just recently finished the project, and stuck it all together as an omnibus edition. It's pretty massive--nearly 450 pages long, 140K words. For a limited time you can get it for 99 cents.

Hipsters. Shane hates them. They dress like artists, but they think like yuppies. They drive up the cost of living in San Francisco, making it nearly impossible for people like Shane to survive. And now they're starting to act really weird, moaning and shuffling and trying to bite.

A terrifying sickness is spreading through the city, transforming the streets into a nightmare of cannibalism and murder. Shane joins forces with a ragtag band of misfits--Mexican punks, butch Chinese lesbians, Castro bears and Oakland thugs--to seek shelter and stay alive. But safety doesn't always come in numbers. And chaos isn't always unplanned...

Thanks all, for your support.
Posted by Marcos at 2:34 PM No comments: 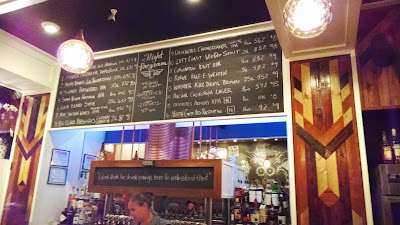 More (sort of) old news: BREW'd is open... and it's beautiful. It's got a classy ambiance--think dark woods and dim lighting instead of REAL's yellow walls--but they've worked some irreverence into the wall mural. Sixteen taps, and the same cicerone-type level of beer knowledge and passion. My wife and I stopped in for the Sierra Nevada Beer Camp event a few weeks ago, and had a great time.

Main downside: expensive. Most of the beers start at $7 and up (click on my picture of the chalkboard and you'll see that there are no beers listed for less than $8). Four beers and an appetizer will run close to $50 when you throw in a tip. Because of that, I haven't been frequenting the place like I thought I would. 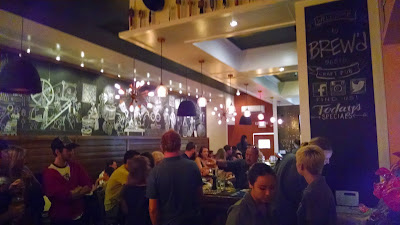 Homebrew in Paradise has moved 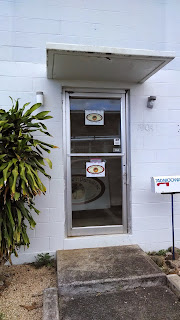 This is sort of old news, but I figured I'd put up a post just in case any readers of this blog haven't stopped by the homebrew shop recently. Homebrew in Paradise is no longer in their old location on Kilihau Street. Their new address is 740 Mooawa Street, off of Dillingham (if you're driving Ewa-bound on Dillingham, it's after you pass the Community College but before you get to the Correctional Facility). It's just as industrial as the last location, but it's a little closer to town.

Posted by Marcos at 6:14 PM No comments:

American Homebrewing Association members now get 10% off at Beerworks 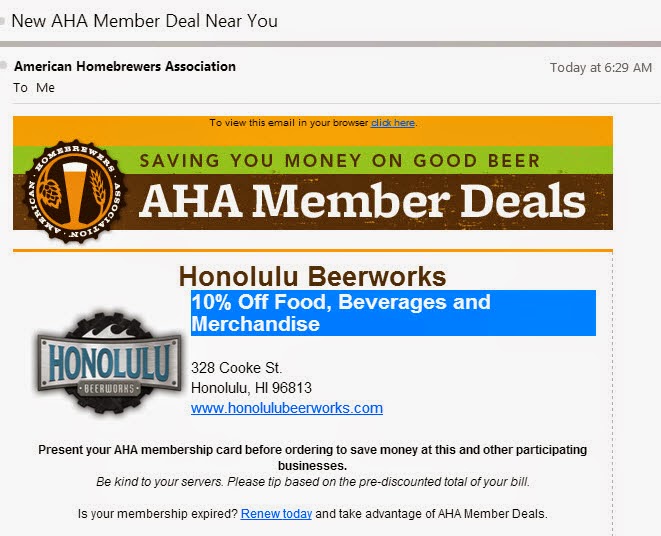 I made my first cider almost a year ago, and enjoyed the experience. It was incredibly easy to do, and I was happy with how the final product turned out: a refreshing drink on its own, and an interesting alternative to beer.

I've been meaning to brew another cider, and I finally got around to it a few months back. This time I wanted to experiment with blending juices, to see how that would affect the final drink. Despite enjoying the first cider, it felt a bit simple, less-interesting than it could have been. I wanted to see if mixing in another juice would result in a more complex drink. 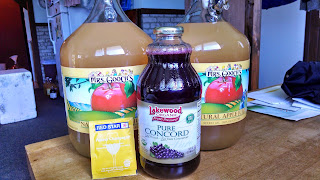 I decided to try adding in a little grape juice--hoping the sweetness of the juice would convert into a tartness that would enhance the crispness of the apples--and I settled on a mix of one quart of grape juice to two gallons of apple juice. I used the same yeast I'd used before--Red Star Pasteur Champagne, which is a very dry champagne yeast that removes virtually any sweetness from the drink, allowing the tart and sour flavors to shine forth.

The most interesting thing for me about adding the grape was how potent it is as an ingredient, how strongly it effects the aroma, flavor, and color of the final product. Despite there being 8 times more apple juice in the mix, the presence of the grape juice was undeniable. 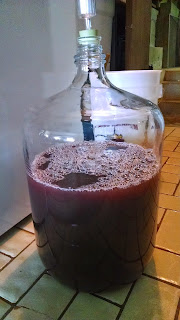 Another interesting thing about the final drink was the way the aroma of the grapes carried through pretty much unchanged, despite the complete transformation of the grape flavor. It was fascinating, even slightly jarring, to bring the glass to your nose and smell sweet grapes, and then take a sip and experience absolutely no sweetness.

And one last little note: back in January of last year I tried brewing a poi beer, hoping to somehow capture the lovely color of the poi in final drink. In the end I failed to do it there, but to my surprise this apple-grape cider turned out to have pretty close to the exact color I'd been hoping for with that poi brew. 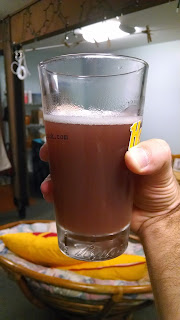 So try it. Start drinking purple!
Posted by Marcos at 12:00 AM No comments: