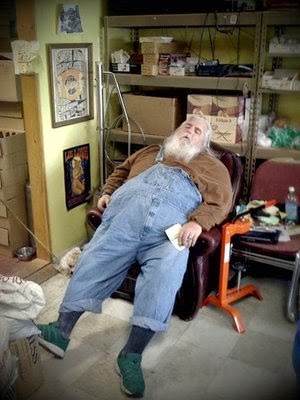 (This picture of Griz sleeping in his habitual location was taken by Chris G., originally posted on Yelp.)

Back when I lived and brewed in San Francisco I got most of my ingredients and equipment from SF Brewcraft. A dominant, unforgettable (and almost unavoidable) feature of that store was Griz. Griz was a grizzled old guy who looked like Santa Claus dressed in overalls. You were pretty-much guaranteed to see him unless you came in near closing, and if you saw him, guaranteed he'd be sitting in the easy chair in the back right corner of the shop. No matter what you knew about brewing, what you came into the shop for, or what type of person you were, Griz would be a key part of your Brewcraft experience.

Griz was an interesting guy. Despite the fact that he never seemed to get out of that easy chair, his presence filled every corner of the shop. You could ask him about any topic related to brewing--and probably plenty of topics completely unrelated--and rely on an opinionated answer. And Griz was an unapologetic contrarian, too; so if you ever came to him with a plan or an idea, chances are you were wrong. (I wrote about this phenomenon on my old brewing blog, Parkside brewing.)

Some people didn't like the type of experience Griz provided. Whether these people were thin-skinned or just preferred a different level of propriety, there were Brewcraft customers who'd swing by the store right before closing specifically so they wouldn't have to face Griz. And truth be told, I butted heads with Griz a few times myself. There probably aren't many who didn't, unless they had absolutely no stomach for a fight.

That said, I also want to say this: in all of the experiences that I had with Griz, he never struck me as a bully. He spoke his mind because he cared about things, not because he wanted to bend you to his way of thinking. And on the occasions when I saw him realize his plain-spoken manner was bowling someone over, he changed his course and held back.

(I've come to value the unapologetic, opinionated attitude Griz displayed more than ever, now that I live in Hawaii. The brewing scene is so small here, and so fragile, that people seem to go to lengths to avoid confrontation. (You can see it in Beer in Hawaii's post on Aloha Beer's closure, in which author Tim Golden tells us that "the real facts are murky and we may never really know what happend, nor should we really care.", though that's hardly the only example.) I miss being around someone like Griz, who wasn't afraid to ask questions and point out bullshit.)

Here's my favorite Griz memory: I stopped by Brewcraft on a Saturday to pick up grains for the next day's brew. There were a few people in the shop ahead of me--brewing newbies with lots of questions and lots of doubts--and they were peppering the guy behind the cash register with worst-case type scenarios. Griz was in his easy chair, like normal, looking more agitated with each additional question. Before I'd managed to gather my grains, a few more people came into the shop behind me. Apparently Griz's maximum-capacity level had been reached, because he started loudly complaining that there were too many people in the shop. "Eric," Griz shouted, "you gotta get some of these people out of here! It's turning into a clusterfuck. Come on!" Honestly, I can't think of any other time, in my entire life, in which I witnessed a shop owner getting upset about having too customers in his shop.

Thinking about it now, Griz's unapologetic stance might be the greatest thing he ever showed me about brewing. Getting your hands on great beer is pretty easy nowadays, even here in Hawaii, because craft beer is a growing market and plenty of breweries are producing awesome product. Homebrewing isn't a necessity anymore, so if you're gonna homebrew, you should be doing it because you love it, and because you have a particular vision you want to pursue. Passion is the prerequisite, not compromise, and Griz was an incredible example of that.

About a week ago I got an email from SF Brewcraft with the following message: "On the evening of Monday, September 23rd, our friend and teacher Greg Miller, endearingly referred to as Griz, passed. In honor of Griz, Brewcraft will be closed for the next two days and will reopen Thursday, September 26th. We are making plans to have a celebration of his life. We will be posting details soon. Until then thank you for your love and support and for this week please raise a glass and tell a story about Griz."

In my life I've only had the privilege of meeting a very few people who seemed honestly, uncompromisingly themselves, and Griz was definitely amongst that small number. The homebrewing world is a poorer place, now that he's no longer with us.
Posted by Marcos at 12:48 AM

Email ThisBlogThis!Share to TwitterShare to FacebookShare to Pinterest
Labels: beer-folk